This is another headache post. I am sorry, but since there is a ball physics competition, I have to focus tutorials on ball physics.

This tutorial covers collisions between balls, and it works with any number of balls, and it’s based on Raman Pfaff’s Physics of an Elastic Collision.

What is an “elastic collision”?

In this tutorial I simply made one single object, a 15px radius circle, linked as “ball”.

Then, in the first frame, just eighty lines of actionscript:

Let’ see how does it work

Line 2: Setting a speed limit. It’s not necessary in this example but we should always set a speed limit. The higher the speed, the lower the accuracy of our collisions.

Line 3: Beginning of a cycle to be repeated n times, where n = number of balls in the stage

Line 4: Attaching the ball on the stage in a random position. Please note that when I place a ball, I don’t check if it will overlay a previously placed ball. This is why placing an high number of balls can cause some problems, but placing “safe” balls is not the aim of this tutorial. Moreover, you can easily script the routine to check if two balls overlay.

Line 5: Setting a collision property to the ball. Collision = 0 means there is no collisions

Line 6: Mass property. Having all same masses helps us to verify the script works… but you can set the mass at any value, and the script will work. It’s just that you’ll see some strange bounces and you won’t understand why since the balls in the stage do not display their mass.

Lines 7-8: Assigning a random x and y speeds to the ball

Line 9: Beginning of the routine to be executed at every frame for each ball

Lines 10-13: Checking if the ball is closer than 15 pixels (its radius) to the left edge of the stage. If so, it means the ball must “bounce” on the edge, so its x position is set to 15 and its x speed is inverted.

Lines 38-39: Updating ball position according to x and y speeds

Well, I told the script was 80 lines long (81 to be precise)… we are at its half and we did not encounter hard points. Unfortunately, this will not last for long…

Lines 42-62: Mysterious routine that solves the collision between two balls updating their speeds according to various collision parameters. At the moment you don’t need to know more.

Line 63: Function to be executed at every frame

Lines 66-68: Determining distance between xth and yth balls with the Pytagorean theorem

Line 69: Checking if the distance is less than 30 pixels (ball diameter, or 2*ball radius) and both balls are not already colliding.

Why are we checking if balls are already in collision? Because we want an elastic collision, and an elastic collision must occour only at a distance of 30 pixels. Unfortunately, we can’t check the distance between balls in a continuous time, but only every 1/framerate seconds, so in most cases we miss the moment when two balls start colliding… in most cases the collision begins when a ball overlayed another one and we have to avoid “fake bounces” as the ones explained in Create a flash draw game like Line Rider or others – part 4… so the entire process is an approximation of a real elastic collision, but this won’t affect gameplay.

Lines 70-71: Set the collision propery of both balls to 1

Lines 74-77: If the distance is more than 30px, then there is no collision and I set the collision property to zero. This is not necessary in most cases but I leave to you the code optimization.

That’s all! Did I forget something? What? The Mysterious routine?

Well… you asked for… you deserved it… don’t blame me for your headache.

Line 44: Calculating the vertical between balls

Line 45: Calculating the collision angle using trigonometry as explained in Create a flash draw game like Line Rider or others – part 3

Line 46: Calculating the ball1 speed, here called “magnitude” because this is the “real name” of the speed in this environment

Line 47: Calculating the ball2 speed in the same way

Nothing new until here, if you are a regular reader. Now, let’s mess up everything.

That’s what we have: a collision of 2 balls in a standard reference axis system, with an horizontal and a vertical speed that form the magnitude like in this picture 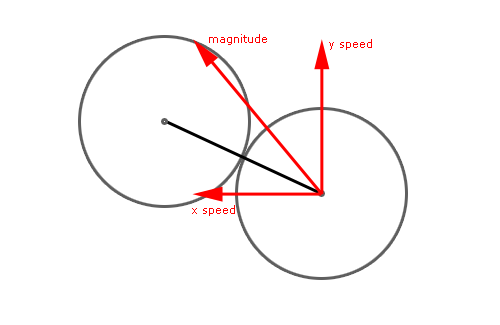 As you can see, y speed is vertical while x speed is horizontal.

Now imagine to change reference axis system, where the x speed lies along the collision line, and the y speed is perpendicular to that, without changing magnitude and direction, in this way 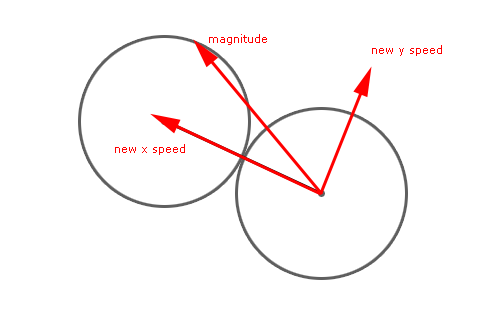 Both pictures show the concept on the right ball, but it’s the same for both balls

All variables we need to know are known, so new speeds are determined this way:

Line 50: Calculating new xspeed using trigonometry applied to the difference from the direction angle and the collision angle (in other words, how many degrees it takes to make the xspeed vector overlay the angle of collision)

The only thing we need to solve is an elastic collision along one axis.

Just like Superman, the law of conservation of momentum comes in our help (and without blue/red underpants).

From Wikipedia: In an isolated system (one where external forces are absent) the total momentum will be constant: this is implied by Newton’s first law of motion. Newton’s third law of motion, the law of reciprocal actions, which dictates that the forces acting between systems are equal in magnitude, but opposite in sign, is due to the conservation of momentum.

Do we have an isolated system? Yes, external forces are absent, it’s windy today in Italy but the wind does not affect my spheres in the stage.

Notice that if m1=m2 then

That means the balls exchange their magnitude.

Translated into actionscript, this is:

And now we have the new x and y speeds, but they are still related to the axis environment we created to have a 1D collision.

Lines 58-61: Determining x and y speeds on the standard axis system using trigonometry. Notice that Math.PI/2 because the angle between xspeed and yspeed must always be 90 degrees (pi/2 radians)

And the problem is solved… here you can see three balls with equal masses bouncing up and down the stage. Should you see two balls overlaying, that’s due to the wrong initial placing as explaining at the beginning of this tutorial. Simply reload the page and everything should work.