This is the first part of an experiment I want to start. Can we monetize a Flash game? And what kind of Flash game should we monetize?

Before starting to explain my experiment, let me introduce you three different categories of Flash games: one-day game, one-week game and one-month game.

The one-day game is a game you can develop in one day, or in a few hours. The game will not have great graphics or stunning level design because this requires time, and the gameplay will be very simple. The one-day game can only rely on originality and gameplay.
Pros: very quick game development – easy to play for everyone
Cons: poor graphic – repetitive gameplay
A big example: Boomshine

The one-week game is a game that requires some days to be coded. It should feature levels, powerups and a more complex gameplay.
Pros: very similar to a “big” game – can be very addictive
Cons: debugging could delay the release or the game may have some bugs
A big example: Bloons

The one-month game is a game that requires a month (or more) to be ready to play. Excellent graphics, great gameplay and a lot of well balanced levels is what it should offer
Pros: It’s a damn good looking game!
Cons: May require a team – If people will not like the game, it would be a very amount of time wasted
A big example: Ball Revamped 5

It’s up to you to choose what kind of game you are about to code, even if I suggest to make a couple of one-day games before trying to shock players with a more complex project.

I’ll try to monetize every category of game, and I am starting with a one-day game called Circle Chain. 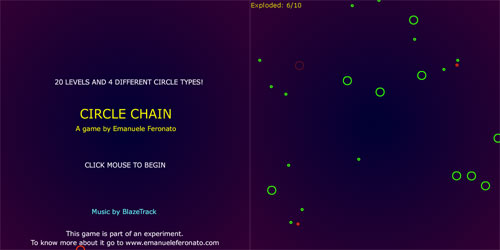 It’s inspired to Boomshine and it’s made of about 200 lines. I will release the source and the tutorial very soon.

At the moment I want you to know I made it in 3 hours. So it’s time to decide how much I want to earn from a game I made in 3 hours. This depends a lot from the Country you live in… here in Italy, an average programmer is paid about 30 euro/hour, even if I know a PROgrammer that earns about 80 euro/hour.

So I am going to define three goals: one for the “average programmer”, one for the PROgrammer and one “dream goal”.

I said the game took me 3 hours, and I am going to calculate an extra hour promoting the game on forums, blogs, sites and so on.

So the average programmer should earn 120 euro, the PROgrammer 320 euro and I am fixing the dream goal to 1000 euro.

Since all payments are made in dollars, here it is the goal sheet:

Honestly, I am not quite sure I will hit the $172 goal

Never mind. It’s just an experiment, and should it fail, we’ll learn how not to monetize a Flash game.

Next question is: how to monetize? I decided to publish it on a page of this site with some Adsense ads and to embed Mochiads ads.

I would like to include Kontera ads too but I dont’ want to fill the page with ads.

The page I made is very lame, but I had to to it this way because I have only an hour to promote the game, unless I want my goals to raise…

Note: being a one-hour game, I am not looking for a sponsor. I will contact some of them when I’ll publish at least a one-week game.

Note 2: Mochiads does not pay you until the game is approved by its staff even if you are displaying ads. So at the moment I won’t submit the game to big portals. I’ll wait until they approve the game.

At the moment I have no further news, so I am waiting for Mochiads…

What else can I say? Play the game and give me feedback about it… how much will I earn? Did you like it? Did you beat all levels?