I want to begin with the critics moved to the game and to the experiment.

Music: A lot of people complained there isn’t any “mute” button or an option to turn off sound. They are right. People may want to play without any sound or with their favourite music in the background. I completely forgot to include this option. This is one of the cons of making a game in a few hours: you will forget something important. So add in your “to-do-before-release” list to give an option to turn off sounds

Goals: I received some emails saying this is an experiment that I want to fail because I set the goals too high for a one day game. In one mail a boy said he would be happy if he manage to earn $20 from a one-day game.
As said, goals depend a lot from the Country you live in, and its currency change with United States Dollars.

Capitalism: Some people pointed their finger at me saying I am doing “capitalism”. Let me explain one thing: monetizing a Flash game is not capitalism. It’s almost an utopy that reminds me the early 80’s when lonely programmers in their rooms/garages made games that we still play today, in some retrogaming sites or with new fancy graphics.
Thanks to Mochiads, Flash portals sponsoring games, Google and Macromedia (now Adobe) everyone can sit in his garage with his entry-level computer and produce a games that thousands – if not millions – people will play and enjoy.

Ok. End of the boring part

I am satisfied of this result, because it’s only the first week and I plan to reach the first goal before next Sunday. Obviously at the moment I am talking about virtual dollars because I haven’t reached the minimum payout, but it’s not a problem since Circle Chain won’t be the only game of the experiment.

Now, let me show you where did I submit the game

The first portal where I submitted the game is newgrounds.com.
This site is very important because most minor Flash game portals browse NG to see what’s hot at the moment, and eventually they will copy your file into their portals, spreading the game for you.
The game was rated 3.53/5 and was reviewed for 8.7/10
Really a success. This means Flash game portals webmasters noticed my game, and the community will remember Circle Chain when I will produce Circle Chain II.

The game was a runner-up for the day but it did not manage to break into the daily top 5. This means that now Circle Chain on NG is history.

Being in the top 5 would have given Circle Chain a bigger exposure, but you’ll need a bit of luck (other a rather awesome game) to be part of it. In the last week, the 5th entry had a score that ranged from 3.59 to 3.93 so the chances to get into top 5 vary according to the quality of other games published that day.
My page on NG

Then I moved to Kongregate. It’s another must-submit site. Kongregate does not show MochiAds ads but has its own revenue sharing system. Circle Chian got 3.11/5 that’s a nice result but once again not enough to bring it to the frontpage.
My page on Kongregate

Once I submitted the game to NG and K, I waited a day to let players rate and review the game. If you don’t get at least 3/5, then don’t bother submitting your game to other sites because the game probably does not meet the requirements to be a playable game. Sit down, read all reviews and fix it or trash it and start another game.

I made my first mistake when I submitted the game to GameGum.
It’s a well designed site with a revenue share system but it does not have enough traffic to make it worth your time. The only game with more than 100,000 views was submitted more than 2 years ago.
My page on GG

Jay is Games is not a portal but a blog that reviews browser and downloadable games. Unlike previous sites, adding a game is not automatic and is not easy: you have to suggest it to the site, and only the funniest games will have a review. You can be reviewed with an entire post dedicated to your game or in the “link dump fridays” where all the runners-up of the week are reviewed in a single post.
Circle Chain got an entire post. It wasn’t commented that good because JiG audience is used to play high quality games and Circle Chain cannot compete with one-week games.
The good thing of JiG is that will point directly to your game homepage. This means JiG players will generate revenue both with MochiAds and Adsense
My page of JiG

The power of viral marketing

With my game submitted in this major sites, the viral marketing has begun

From Wikipedia: Viral marketing and viral advertising refer to marketing techniques that use pre-existing social networks to produce increases in brand awareness, through self-replicating viral processes, analogous to the spread of pathological and computer viruses. It can be word-of-mouth delivered or enhanced by the network effects of the Internet. Viral marketing is a marketing phenomenon that facilitates and encourages people to pass along a marketing message voluntarily. Viral promotions may take the form of funny video clips, interactive Flash games, advergames, images, or even text messages. 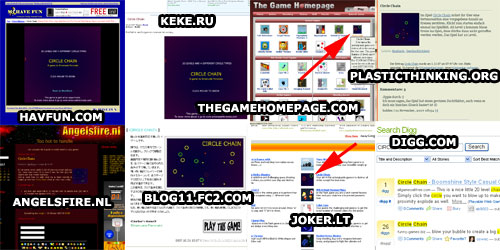 Plans for next week

I don’t want to fire all my bullets at once, so I’ll wait another day or two, then I am going to submit the game to other portals and some forums.

Meanwhile, I have the concept for the one-week game.