Today is a very important day. For three reasons.

First: For the first time (as far as I know) a coder that published a complete game with MochiAds released the full source code of its game.

Third: I am the first to publish the source code, with the full permission of Alejadro Quarto, from Argentina

Alejandro runs a blog mainly about Flash Examples, and even if the blog is running only since october 2007, it’s full of useful tutorials. The name of the blog is alejandroquarto.com and I think it will be a “must read everyday” very soon.

Unfortunately some of the content is written in spanish, but even spanish posts contain a link to english content published by the aouthor elesewhere.

But let’s get back to the game.

As said, Alejandro is releasing the full source code of his pool game. I really want you to play it because you must see how good is the game. It’s called PocketPool 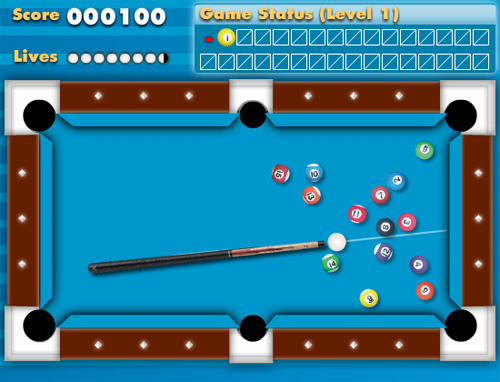 That’s how he describes his work:

I have to say, the physics are not real, cos it can take a long while to play with all the Newtonâ€™s laws. Anyway, simulation is playable, and compared with any webgame arround. If you want to play real pool, development can take more than few hours.
This is the game screenshot:

Art is based on pics i found on google, and some Flash edition, you know, filters like shadow, glow, etc. The game is complete, with loading, splash, gameplay, game over, and highscore. All the highscore system is provided by MochiAds. Really simple to integrate and it works really cool.

He is trying to monetize the game with MochiAds, and that’s how it’s going:

Alejandro made this game in a day (!!!), so the source code may be not the cleanest ever, and some variables and functions have spanish names, but I found it very clear and it’s amazing how he made the entire game in a bit more than 700 lines of code.

On his blog, he plans to make a step by step tutorial of the game as soon as he can

But what makes this entry a special one is that a developer is releasing the source code of a game he is trying to monetize.

I would like it to be an example for all game developers out there… if we share our knowledge and experience, this will lead to better games and higher earnings.

Download the source and give Alejandro feedback and deserve him good luck with his game.

Now it’s my time to dive into 700+ lines of actionscript and learn as much as I can.