I was quite impressed of a new game called Metro Sibera Underground… a game with a very simple concept, simple graphics but excellent level design. 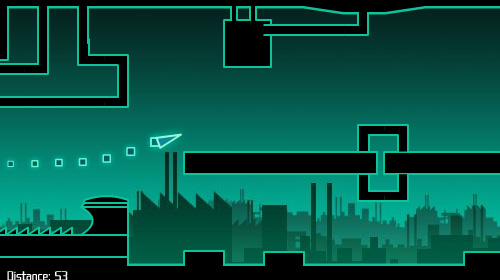 Metro Sibera Underground (MSU from now on) is a one button game, and that means that you can play the game only using one button. MSU uses the SPACEBAR to thrust the engines. Fullstop. Player will feel gravity when the engines aren’t working.

In this first part, I am creating the blurred graphics and the movement system.

Line 1: Importing the library needed for the glow filter

Lines 2-3: Defining ship and smoke glow filters. This will give the blurry effect. More information about filters at Create a flash draw game like Line Rider or others - part 1.

Lines 6-7: Defining ship x and y speeds. x speed never changes. Play with the variables just explained to see how they will affect gameplay. You can find more information about gravity and thrust at Flash game creation tutorial - part 1

Line 8: Defining a variable to store the interval between a smoke cloud and the next one. In my game, I want the ship to release smoke only when the engines are used

Line 9: Counting the frames passed since the release of the last smoke cloud

Line 10: Variable to check if the player is using engines or not

Line 11: Placing the ship in game

Line 12: Applying the glow filter to the ship

Line 13: Function the ship will execute at every frame

Line 15: Decrease y speed (because a negative number means the ship is going up)

Line 16: Decrease smoking interval (because the player is going pedal to the metal)

Line 20: Calculating the angle of the ship using trigonometry. Some hints about trig at Create a flash draw game like Line Rider or others - part 3

Line 22: Increasing the variable counting the number of frames passed

Line 24: Placing the smoke particle on the scene

Line 25: Applying the glow filter to the smoke particle

Line 26: Function the smoke particle will execute at every frame

Lines 29-31: When the smoke becomes totally transparent, remove it from the stage

Line 33: A smoke particle has been just placed, so the frames passed since the last placement must be set to zero

Lines 36-39: When the player presses the mouse, turn on engines and set the smoke interval to 10 frames

Lines 40-43: When the player releases the mouse, turn off engines and set the smoke interval to 100000 frames

And that's it! You may need to reload the page to see the game working. Press the mouse to keep the ship flying

Then download source code and start flooding the web with MSU clones :)