Only two days after the publishing of Create a Flash game like Metro Siberia Underground, Oskar Koli tries to answer one of the most commons questions asked in the comments… how to create levels dynamically?

One of the possible answers lies in Wall Dodge game 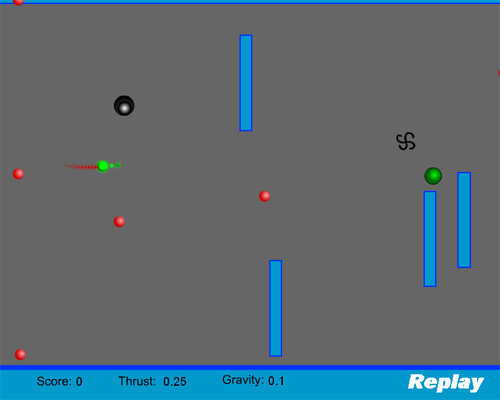 That’s how Oskar explains his work:

Hi Emanuele,
My name is Oskar Koli and I have been following you blog for about 6 months.
I liked your latest tutorial “Creat a Flash game like Metro Siberia Underground” so I made my own game out of it.
I figured out how to make the walls move dynamically. Of course u know it too but I just wanned to show u this anyway.
U can post both the game and the source code on your website if you feel like it, but I understand if u won’t but I would appreciat it if you would at least tell me what u think about it.
In the .fla file there is probbly some useless code because I used some tutorials from some other sites and changed them so u can clean it up a little if u want t.
Im making another game right now, this one was something I just made when I got tiered of working on the other 1. So u should be expecting another game in a week or so.

The code is not the clearest I’ve ever seen, but will understand it easily.

After the Complete Flash pool game with highscores, this is the second full game with source code to be published here.

I would like to thank Oskar for sharing the code, hoping that more and more flashers will follow his example.