Probably you don’t know, but I won a contest hosted by MochiAds some time ago.

I won the referral bonus of the first (as far as I know) MochiAds contest. Having my name next to a Nitrome guy is something weird… a blogger that makes tutorials about Flash games next to one of the biggest Flash games developing company.

Now let me introduce the new MochiAds contest… I know it sounds a bit “old” but I am going to introduce it in a new way… on a 50” tv screen and wearing the tshirt MochiAds sent me. 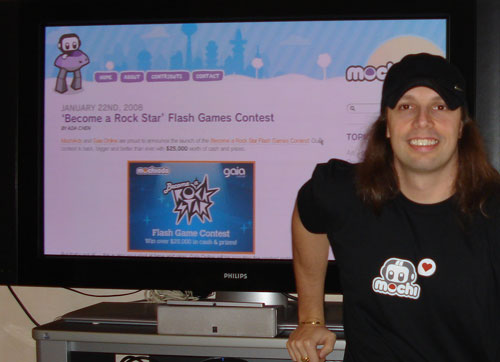 Now it’s time to become a rockstar with â€˜Become a Rock Starâ€™ Flash Games Contest… with $25,000 waiting for you.

Just read the rules at the official page and grab as much money as you can.

Another thing some of you probably did not see is this screen… that’s what happens when you reach the minimum payout.

Finally, I would like to know what are doing the 77 developers I referred to MochiAds… still waiting for the first payout? If so, I think entering a contest will help your game to be played massively and reach the minimum payout.

We have a complete about to How To Be a Winner at Flash Game Contests made by the guys that created Flash Game License, the first virtual broker of Flash games.

With all those opportunities to have your game played by tons of people, you can’t stay under the $100 payout for a long time.

And remember, a gold mine for Flash games, once you integrate its API, is MindJolt.

That’s it. Go and win, better if using one of my tutorials as a good start for your game… I will be glad to see one of you winning the contest, even if your chances are quite low since I am going to enter the contest. Well, the 2nd prize could be yours.

Thanx to Ada Chen for sending the T-shirts