Normally I use to write tutorials explaining what I’ve done to try to replicate a famous game, but I always start with a “clean” actionscript, without all errors made during its creation

This time, I will write a tutorial based about what I do, step by step (errors included) to replicate an old C64 glory.

During this journey, you will learn how to solve problems (because I’ll find a lot of problems) and a lot of new techniques.

The first thing I had to do was… deciding what game I was about to try to replicate.

There are lots of godd C64 games I would like to replicate, and after an hour reading old reviews, I decided to clone Bombuzal.

From Wikipedia: Bombuzal is a computer puzzle game designed by Antony Crowther (credited as Ratt in the game) and David Bishop for Image Works[1]. The game was released in 1988 for the Amiga, Atari ST and Commodore 64.

Read carefully: 1988! I am going to make the remake of a twenty years old game, but I know it won’t be easy because it’s a very complex game. 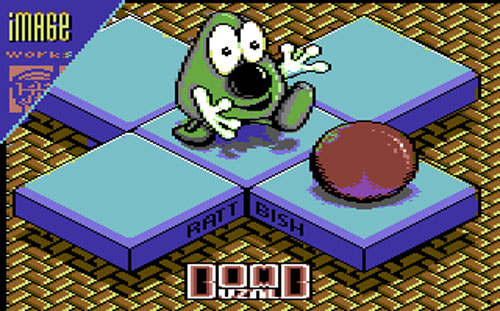 First, I want to tell you why I decided to clone Bombuzal. It’s a very complete game, it has two different game views (2d and isometric), codes to skip levels, different tile types, different bombs and so on.

Its Amiga version is remembered as “one of the cutest, cuddliest puzzle games ever”.

Now that I decided I am going to clone Bombuzal, the next thing to do is getting a C64 emulator and the game disk image. I don’t even know if it’s legal or not, but I played this game 20 years ago and I don’t remember much of the game.

Then, I played the 1st level to understand how does it work… I’ll start cloning the 1st level and as the game get more complex in later levels, I’ll add new features.

This is how does it look the first level: basically Bombuzal is a tile-based game

here it is a screenshot of the first level, in 2d and in isometric view

There are two type of tiles and one type of bomb.

The first step is creating the routine that, given an array, will draw the stage. Any clue? Every reader that will contribute in the creation of the game will get credited in the credits page.

Tomorrow I will start coding, meanwhile if you want to write down some code…