Ok… I think it’s time to start talking about Actionscript 3. Even if AS2 is way to be dead, is becoming a bit obsolete… every new library like Box2DFlashAS3 only works in AS3, so sooner or later we must learn AS3.

I am going to create the same prototype explained at Flash game creation tutorial – part 1, just using AS3

The first thing you have to do, is creating the ball itself as a new object, and giving it the ball linkage name, as usual. 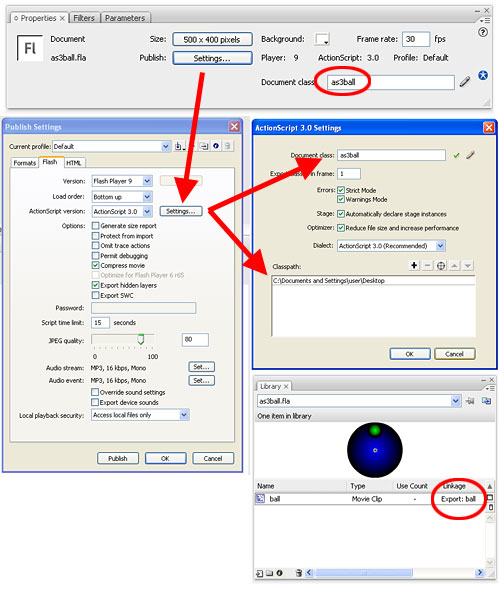 Now, you’re ready to write your class file… click on the pencil next to your document class name and here it is the AS3 code:

Line 1: declaration of the package in which we are going to build our class. Normally the syntax would be package

Line 2: importing the package that contains the core classes that the Flash Player uses to build visual displays.

Line 3: importing the package containing the classes to manage events such as keyboard events, mouse events, and more

Line 4: importing the package that contains user interface classes, such as classes for interacting with the mouse and keyboard

Line 5: declaration of the main class. Class name must be the same as the name of the .as file

Line 6: declaring a new variable called the_hero as a Sprite type (think about the sprite as an AS2 movieclip), and assigning it the ball movieclip. From now on, we will refer to the_hero everytime we want to move the ball.

Lines 7-10: declaring speed, power and friction variables as seen in the AS2 tutorial

Lines 11-14: Declaring four boolean variables, one for each direction, and setting them to false. You will understand why I am doing this later in this tutorial

Line 16: Adding the hero to stage. addChild is the AS3 method to see a display object appear on the Stage. In this case, it displays the the_hero sprite that contains the ball movieclip

Lines 17-18: Placing the_hero movieclip in the centre of the stage.

Line 19: Adding a listener for the KEY_DOWN event (a key is pressed) and calling the key_pressed function when the event is triggered

Line 20: Adding a listener for the KEY_UP event (a key is released) and calling the key_released function when the event is triggered

Line 21: Adding a listener for the ENTER_FRAME event (the beginning of a new frame, just like the old AS2 onEnterFrame) and calling the render function when the event is triggered

Line 23: Beginning of the function to be executed every time a key is pressed

Lines 24-37: Performing a switch with the keycode of the key pressed, setting to true the boolean variable corresponding to the arrow key pressed

Lines 39-53: Same thing for the key_pressed function, but the key_released sets to false the variable corresponding to the arrow key released

These two functions may seem useless, but they are the core of the script because I can’t perform the old Key.isDown… I can only see when a key is pressed and when a key is released. And remember the player can press more than a key at the same time

Line 55: Function to be executed at every frame

And here’s the result:

As you can see, AS3 learning curve is a bit harder than AS2 one, but once you understand the basics, you can achieve results that are simply impossible to get with AS2