Once you read part 1, you should know how to have a friendly url to play a game in your Flash game portal.

In the previous example, I showed you how to transform this link:

This is called “friendly” url, and now I’ll show you how to improve it. Starting from…

There are thousands of ways you can store your games data into your database, but all should follow a rule that in the table that stores your games information you have a column where you saved the game name.

No matter if you called the table “games” or “entries” or “bananas” and you called the column “game_name” or “title” or “apples”… you should have a table with all games with a column for the game name.

We can say the “game_title” column is a text one (or something that works in the same way) where basically you save stuff like this one:

~TimedHouse~: A game name with one or more special chars, where in this example I am calling “special char” every character that is not an alphanumeric one

As every game developer is free to choose the name for his game, we must convert it in our standard way to name games.

There is not a right way or a wrong way, just choose your way.

I’ll clear this concept with an example. Let’s Google for a popular game like Desktop Tower Defense and you will notice that, as example, Kongregate’s urls is this one

while Jay is Games’ url is

So it’s time to introduce you my own rule:

All non-alphanumeric characters will be removed, with the only exception of spaces that will be changed with a -. The string will be lowercased too.

No matter the rule you will follow, you will have to create a new column in your game table that will contain the “translated” name. 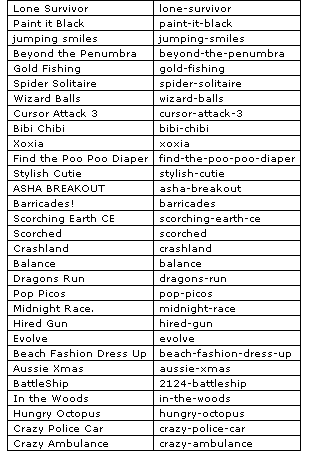 once you updated your database, it’s now time to update your…

In the previous example, our .htaccess file was

Now it’s time to add a line in this way:

Line 4, the new one, acts in the same way as line 3, explained in part 1, just waiting for the game string to redirect to
play.php?game_url=translated_game_name

and that’s all for the .htaccess

Now, you can play Jamag in four ways:

As long as your play.php page detects if you are passing the id or game_url variable.

I did this way.

Hope you will find it useful