Let me introduce you an interesting opportunity to improve the look and feel of your games and win cash prizes: MeezInside Avatar Games Contest hosted by Meez and FlashGameLicense.

You should already know FGL for its marketplace and First Impressions services.

Meez is a social entertainment site where can create animated 3D avatars, dress up the avatars, play free games and use the avatars in virtual worlds.

You can also use created avatars as an AIM emoticon or export it into MySpace, Facebook and other sites.

I am trying the service and I have to admit the avatars you can create are very detailed.

There are lots of backgrounds, settings and assets that the only limit seems to be your creativity… and your Coinz, since some features cost Coinz, Meez‘s virtual money.

This is an avatar I created almost for free, and that will be used in a game I am developing

FlashGameLicense and Meez are offering Flash games developers over $20,000 in prizes for the best games using the MeezInside Avatar API.

Oh, yes, they released an API!

Your entry is also eligible for primary licenses, ad revenue, and the other licensing options you expect from FGL!

Refer to the official page for full guidelines and let me introduce you the API.

As said in the API docs, the Meez Inside Games API offers a turnkey solution for users to bring their own custom characters effortlessly into Flash games deployed anywhere on the web. The Meez Inside Games Platform also allows developers to easily and quickly generate custom NPCs to embed in their projects, while selecting from a broad range of gameready animations.

Once you created an avatar, like mine, go to Meez Image Service and with a couple of clicks in a simple interface like this one 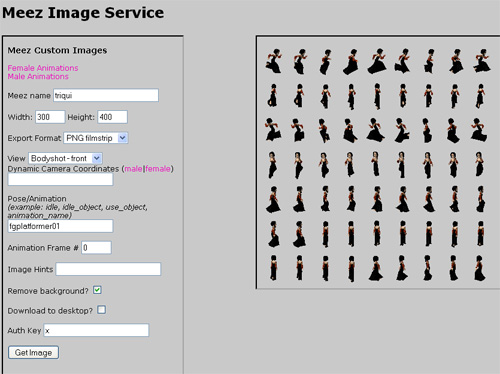 You will be able to generate a filmstrip with an animation such as all walking directions for a game like I did, or gestures such as laughing, waving and so on.

Also, I would like you to look at the detail of every single frame. 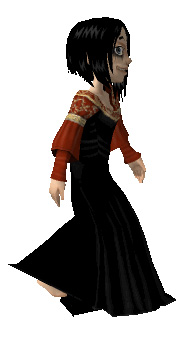 Now, even if you are not interested in taking part at the contest, you’ll have a beautiful animation to be used in your next game… add to it the chance to win up to $10,000 (the first prize) and you’ll definitively want to know something more about Meez.