It’s the case of byronay that worked on Multiwinia, a multiplayer game that will make you challenge your opponent to a game of stick-man slaughter and witness devastating digital-war unfold. 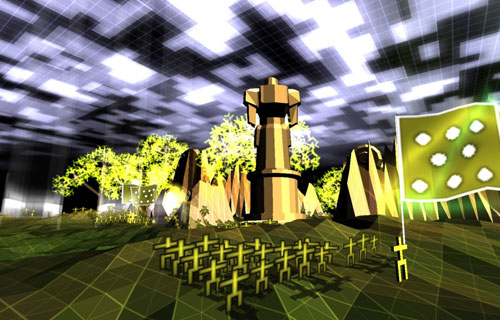 Byron has decided to give away all 10 copies to random people and all you have to do to get one of those 10 copies is:

2 Play the demo and take a screenshot of the game over screen showing you winning the game. Change the gamer tag to show your name and you have to have won the game to qualify.

3 Send the screenshot of you winning the game to dev[at]xiotexstudios.com. Make sure you put â€˜The great Multiwinia give-awayâ€™ as the subject of the email.

Then Byron will choose the winners and post them his blog, where you can also find more information about the give-away in the official page.

At this time I wanted to know something more about RTS making and game developing on platforms different than Flash, and that’s the exclusive content Byron is sharing on this blog.

Multiwinia was the first RTS game I have worked on. Previous games were games like Mutant Storm Empire for XBox 360 Live Arcade and NHL for XBox so Multiwinia was a fresh change. The biggest challenge was the sheer amount of activity going on in a single game and making sure that all 4 players saw the same thing. We did that by using a predictive physics system that when it worked well was a dream but when it went wrong was a nightmare to debug. The network protocol devised for this game is very light-weight and sends very little information between the clients and the server and yet we are able to have over 2000 units all having battles on screen. I must admit from a game point of view it is the game I am most proud to have worked on.

One of the biggest issues we had however was on the control mechanism – everybody has their own view on how an RTS game should be played and this caused a lot of issues with our beta testers and the magazines that were reviewing the game. In the end Chris Delay locked himself in a room for a week and came out with the current control methods we have and I think it works well.

At the time I am writing, only 2 people won the free copy, so there are 8 more waiting for us.

What are you waiting for?