I know a lot of people saying they are programmers just because they can handle Excel formulas without (too much) hassle.

Others say they are programmers because they modified a form validator script found somewhere in the web and, hey, it worked. For almost a week.

1) You are making a living with programming

I don’t want to know how much do you earn, because I know this depends a lot from the Country you live in, but if you are a PROgrammer, then PROgramming is your PROfession and you must make a living out of it.

A PROgrammer never gets bored when programming, so you shouldn’t be surprised to find yourself testing some useless script just for the sake of doing it.

A real PROgrammer is never fully statisfied about his scripts, so he keeps adding new features until he’s about to fall asleep

If a routine does not work and you can’t figure out why, then you cannot eat, you cannot go at the gym, you cannot even sleep before you know what happened

I have such ideas at the restaurant, at the cinema, and even when I am listening to a friend of mine complaining his girlfriend is probably cheating him. It happened. Seriously. But I did not suggest him to “remove the object to free memory”.

As far as I know, who developed the alphabet did not know C, so this will probably remain a mistery.

7) Your bookshelf has a pile of books about programming

Who cares for latest Stephen King’s novel when you can read interesting books about programming? Here it is my bookshelf 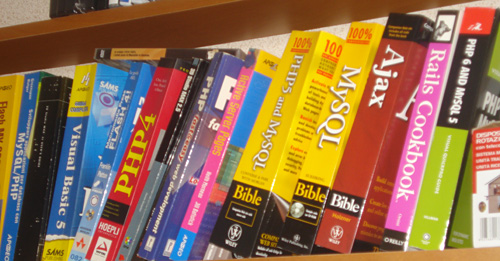 This happens mostly when playing games… when I played Quake, I wasn’t amazed by the first real 3D first person shooter, but by knowing someone was skilled enough to code a real 3D engine performing enough to handle all gamind dynamics

I mean… wouldn’t it be perfect if you TV remote control had a little console where you can enter something like this:

It would be fantastic…

11) Other PROgrammers are your idols

This is very important. If you want to be fan of famous PROgrammer, check this page and be his fan. One day or another, he will publish some exclusive content in it.

PROgrammers are ironic. If you aren’t ironic, check your configuration file or report it to your customer service