I want to share with you the experience of Ken, the owner of GameTweek during the creation of his first Flash game: Monkey Treasures 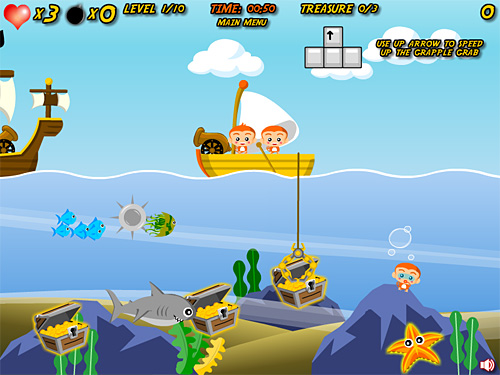 « I’d like to start off by saying that I really enjoy reading your informative blog.
You do a great job of creating tutorials and providing info for the online community.
Keep up the excellent work because I think emanueleferonato.com is the best Flash
blog on the internet. =)

I had the idea of creating a game with cute/funny characters who’s goal was to collect treasures before being attacked by pirates. The game play mechanics of the original Gold Miner is exactly what I would be simulating in the game. This led me to google search for “Gold Miner Tutorial” and that’s how I found emanueleferonato.com. The sample source code I found, helped me to get started on my project.

My intent was not to create a Gold Miner carbon copy, but simply use the same game play mechanics and apply that to a “treasures of the sea” type setting. I created a mock-up drawing and sent it to Vaisaga Project, who did a great job of interpreting my idea. A few weeks later, I was given the initial artwork and felt it fit perfectly with the game. The cute monkey characters with pirates, boats, sharks, and treasures were exactly what I was looking for.

Now that I had the artwork, the next step was to put things together and make everything interact through Action Script. I had no experience with Action Script in the past, but since I have 9 years of programming experience in C++, the learning process was not that bad. This new Flash game was my side project outside of my regular job. Finding time to work on it was probably the hardest part of the whole process.

I read several different topics on your blog which also helped with development. The other 2 topics were: “Designing the Structure of a Flash Game” and also “Flash Simple Timer/Countdown”. I did not buy any books to learn AS2. All of the information I learned came from various online sources. Your blog was my first source for info. I also watched numerous Flash Tutorial videos from Entheos: http://www.entheosweb.com/Flash/default.asp and also downloaded some tutorials from Cartoon Smart: http://www.cartoonsmart.com/free_index.html. MochiLand also had some informative links for Flash game development.

I spent some time reviewing the API in order to know what functions I needed to use. After experimenting with the code, I started to get a good understanding of how things work. Your clear tutorials of course were of great help. The rest of my development time went into polishing the game play and in-game interactions. I searched for and added sound effects that would help with the cute/funny theme of the game. I also asked a few friends to play the demo version. I continued to update the code as needed and finally released “Monkey Treasures” on May 1st, ’09. I hope that players will enjoy the game. If feedback is positive, I might create a sequel. I am still learning as I go along so all feedback will be helpful in improving future projects.

I really enjoyed creating the game and getting real experience with Action Script. The creativity of Flash game programming is something I will be focusing more on in the future. My next goal is to create a game in AS3. »