This is the interesting story of Michael Edlavitch from Hooda Math, a 10,000 visitors/day successful niche Flash arcade site. 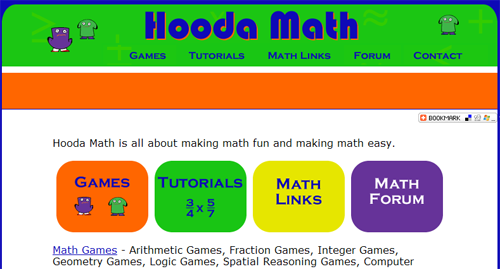 If you are an arcade site owner, you can’t miss this:

« Before Walmart moves into a small town they offer classes to the small business owners on how to keep their businesses a float. What do they teach?
Don’t be like us, find your niche.

Last August, I had still not found a job for the coming school year and had a lot of time to procrastinate while waiting for interviews.

I knew I would be teaching math somewhere and to who knows what age.

I figured I would also have a flash version of the original game “Number Munchers” that taught me all of my arithmetic facts, so that my students could also learn there facts in a fun and addicting way.

I made Number Eaters for Multiplication, which I easily remade another version for Addition, Subtraction, Division, Fractions, Decimals, Place Value, etc

I needed a place to easily bring my students to play these games online.

I have always believed that a good website contains OO in its URL, yahOO and gOOgle.

There must be something to it. So I searched baby name sites for a name with OO.

I came across the name Hooda. Hooda means “the right way”.

I thought “the right way” to learn math? How perfect I will name my site HoodaMath.com .

It will also be easy for the students to remember because it sounds a lot like the phrase, “Who the Man”.

Since I learned Flash and I still had no job, but I had rent to pay, I decided to look into freelance work, which paid nothing thanks to outsourcing online.

I read about Flash games a lot, one blog I went back to regularly was emanueleferonato.com

He was full of advice on how to make different types of games. At his blog I learned about FGL, where programmers could sell there games.

It inspired me to make a high quality game.

I still had math on the brain so I made a high quality pacman style math game for students to learn their Factors. I called it “Factor Feeder”.

I put it out on FGL, got lots of comments on how to fix it up and make it look more professional. No-one wants to buy a math game for their arcade.

I gave up and displayed it on NewGrounds, the members there explained to me that teenagers don’t want to play a math based game, so it is never going to get tons of hits

I discovered Adsense
I figured OK, I can’t sell games, but if you read another article on emanuel’s blog about monetizing using MochiAds and do the MATH. I realized the real money is in adsense anyways.

So I added adsense to my site. I forgot to mention my wife knows webdesign so I had her make a kid friendly looking site, then gave her the adsense code and she placed it easily using dreamweaver.

I read on adsense about the success stories of sites that already had an audience, and I was like oh that will never happen I don’t even have an audience.

The school year started I got a job, actually 2, because I was split between 2 schools working more hours than I was getting paid and teaching students ranging from 9 years old to 14.

I also had access to the computer labs and brought my students to play the games at my site ;). One day a middle schooler and I were talking about games and he said why don’t I put Totem Destroyer on my site.

I thought well lets just play it on another site. You can’t because the school systems have blocked all the game sites.

Luckily I have a math site (I still had the intention of putting up tutorials), I decided to put on Totem Destroyer and a few other games that I believed to be Math related like Coffee Shop.

Needless to say my site became quite popular.

I decided if I was going to make any money on adsense, I better start telling everybody about it.

I discovered all the homeschooling blogs and let them know, then I emailed everyday tons of teachers across the country and still do, my site was growing, I was making a little over $100 and I was happy.

I decided to write to NCTM (National Council of Teachers of Math) about my site and requesting to get mentioned in their Newsletter.

To my surprise they immediately said yes, and HoodaMath will be in there in the July/August issue. I am looking forward to the publicity.

I figured why not take another shot and ask Multiplication.com to put a link to my game Multiplication Eaters, he did, and my traffic grew tremendously.

I also decided to reinvest the monthly $100 or most of it on Adwords, I still needed to get more visitors. I won’t give away all the tricks, but keep in mind with Adwords, you only pay if someone clicks on your ad, not if they just read the words “Hooda Math”.

Thanks to my spamming and more importantly to a great link from Multiplication.com, my site grew rapidly and I was getting $100 more each month.

I decided I better start investing in games. I looked into sponsoring games at FGL but they wanted $500 or 10,000 unique visitors a day.

I thought I better start saving up money. I spent the money I had on outsourcing to a couple of programmers to make games, I’m still waiting for the games, hopefully soon.

But in the mean time I added Google Analytics and found out that I am getting 10,000 visitors a day and immediately let FGL know as well as every single person I talk to who appreciates what a big deal that is. and here I am writing an article for a blog I use to read in awe.

Here is my first game I made by outsourcing