You should remember my post Create a Flash game in minutes with PlayCrafter.

Well, I made my first game with this tool, and I want to share with you my opinions about the editor. 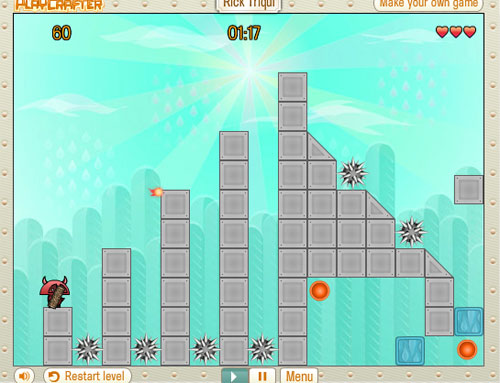 Then, read my comments

After playing some PlayCrafter games I found most modders used it like a sandbox, putting in every asset the editor offers.

So most games suffer the problem they are filled with everything kind of asset, and the final result is bad, it’s like adding all effects to a Photoshop layer. The result won’t look good.

So I designed Rick Triqui as a Rick Dangerous tribute, at that time level design was so interesting that some spikes and a couple of ladders could challenge an expert player for hours.

So this is my first advice: dont’ fill a level with every asset, in my game I only used solid blocks, destroyable block, spiked balls and plasma cannons. The less items you use, the more you must focus on level design.

Making the game itself was like playing a game. I moved any kind of object, adjusting its position, cutting, pasting, and so on. The editor is very powerful, you’ll enjoy making your game

Let me warn you: if you want to make some bucks out of your game, you must download it and upload on revenue sharing sites such as Kongregate or on a web page with ads in it. In order to do it, you need a premium account.

Using PlayCrafter without a premium account means just using it like a sandbox. Now, the first bad new… due to the large amount of silly games, in order to download a game even if you have a premium account, you’ll need at least 25 plays and 3 likes.

There isn’t a large amount of people in the portal (I counted 28 to 32 people in the chat) so it took me a couple of hours to get such visits, and I had to beg for plays in the chat (shame on me).

Then, once you can freely download your game, you’ll notice you can’t get the game in real time… you’ll have to wait for PlayCrafter to send it to your email 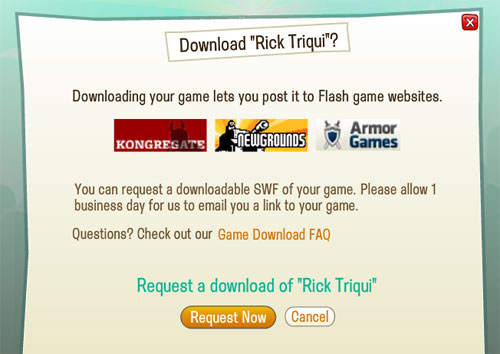 I got my game in a couple of hours but I think this may change according to your timezone and the time you upload the game.

Finally I was ready to upload the game, and I have to say PlayCrafter guys did a great job embedding Kongregate API’s and clear instructions about their configuration in the portal.

On request, they can add a MochiAds to your game and you’ll get 10% of the revenue, and if you want to use your game for commercial purposes (to advertise a commercial product, etc.) then it’s $100 / game.

Try to create a decent game because like it or not all PlayCrafter‘s games look very similar, and I saw some comments on PlayCrafter games saying “stolen” or “stop publishing crappy PC games” and so on.

Last but not least, even if I have a premium account there are two features I’d be willing to pay for:

* Using my own MochiAds. With 10% of the revenue (that means 5% of Mochi’s income), it’s quite senseless wasting time uploading the game anywhere

That’s it… now give me some feedback about Rick Triqui.

I’ve just received an update from Mathilde Pignol from PlayCrafter

If you would like to use your own MochiAd, that’s no problem. Please PayPal the $100 to cm[at]playcrafter.com and send me the MochiAd ID that you want to use. I will compile it in to your game and send you a new link.