Today I want to introduce you a Come2Play multiplayer API tutorial written by Emanuele Ornella from Mind the Move.

Emanuele is a Flash game developer and a board game designer too.

« After the development of my first two games Tokyo Train and Haunted house I am interested in development of a multiplayer game. For this reason I started to study the Come2Play API.

Links to the project: http://www.come2play.com/developer.asp

The goal of the tutorial is to show how to build a Tic Tac Toe game using these API.

The project can be downloaded from
www.mindthemove.com/blog/projects/TicTacToeC2P.zip

These API are basically used to have a communication between one or more clients (in Flash AS3) and the Come2Play server to allow a multiplayer game.

There are 2 type of functions: operations and callbacks.

I am going to use two classes.

– MainTTTC2P that extends ClientGameAPI. This is the main class the acts as controller

– TTTC2PViewer that is the viewer class. In some way, because the game is simple and it is for tutorial purpose, this will work as model as well.

I am not using an event driven approach as in the tutorials from come2play project because I found this confusing the main focus that is to learn how to use the basic API by come2play.

For any reference to the API this is the link: http://come2play.com/API_inner.asp?f=1&newsid=357

This class is created in the first frame of the FLA file: 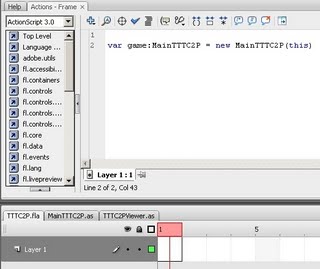 The class is declared as:

Moreover I pass this movieclip to my viewer class that is created here.

The call to doRegisterOnServer is the way for the client to enter the lobby for this game. The call to this function should be done using AS3_vs_AS2.waitForStage function.

On this function you get back some custom information. Calling the helper class T you can get some information back from the server. One simple example is to use the constant string CUSTOM_INFO_KEY_myUserId to get your user id. Because this is a important information it’s useful to get this stored.

Remember that each player will receive from the server a unique id to be identified. It’s critical for the client flash game to know the user id. In some how this is telling the program who is it.

The second callback function the client will receive is gotMatchStarted. This is triggered as soon as the game is started.

In this function the most important information is the list of the user ids for all the players. Again this is critical to know so this is stored in an internal variable.

I found useful as well store immediately where in this array the client is. This is done using the already stored information about my id.

Let’s have an example. If myUserId =41 and the array received is allPlayerIds=[41,42], this client has index 0 in the array while my opponent will have index 1. Therefore myUserIndex=0; This is another way to know who the client is, in terms of index in the array of all players.

This is the time where to start the new board using theViewer.startNewGame. The viewer class should also know what is myUserIndex, therefore I am going to store this on that class.

In this function I also start a loop using the ENTER_FRAME event. This is a function that will be called periodically with the fps set up in the FLA. This is a way to check if the viewer class has set up any new moves. This is an alternative to the event driven solution found in the come2play tutorials.

We will discuss this later.

The last function is used to define the first player. Because the game is in turns, only one player can make a move. Therefore this information must be set up.

A simple way is to define as starting player the first player in the index of all user ids. This information is stored in the currentturnIndexPlayer in the viewer class.

You need to think to the 2 clients that received the same array of the player ids (allPlayerIds). Therefore both clients have the user ids in order in this array: the first element of the array (allPlayerIds[0]) will be the same for both clients.

It is time now to see the viewer class.

In the constructor the movieclip is stored.

Then the board is created. I found useful to have a linear array of 9 elements instead of a double array 3×3. The index of the linear array will be:

In order to display an empty square or a square filled with the “x” or with the “o” I have created a Movie Clip symbol called Square and I have exported for Actionscript. 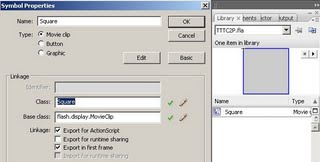 Then I set up the Square movieclip in the right position and to the right frame (squareNew.gotoAndStop(EMPTYFRAME);). Then I add this new symbol to the stage and to an arrayOfSquares that I use to keep track of the clicked squares.

Each movieclip is registered with a MOUSE_DOWN event. The called function is clickHandler.

This function is immediately exit if it is not the turn of this client. This is done comparing the myUserIndex value with the currentturnIndexPlayer value.

Then the target of the event is used to know which square was clicked. Only if the square is empty (that is checked using the currentFrame of the MovieClip then the square is changed calling the function setSquare (this function will be called to set the square also to set an opponent move). This is done simply using the procedure gotoAndStop to the playerIndex value (added by 2 because the first symbol “x” is to the frame 2 as you can see in the timeline for Square).

This is the signal that the main class will check in the polling cycle inside the timerHandler. Actually there are 2 condition must be fulfilled: must be my turn and the theViewer.squareClickedIndex must be different than -1 (=theViewer.NOCLICKEDSQUARE).

If so the sendMoveToServer is called. The main purpose of this function is to send to the server the message that a move was made by the current player using the function doStoreState.

The doStoreState function needs only one parameter that must be an Array of type UserEntry. Actually the array can contain only one element.

To create a variable of type UserEntry the static function create is used:

- theKey must be unique if you want to store a new message. If you use a key already present this will override the previous one.
- theValue is the actual message that you want to send
- isSecret indicates if the other clients will be allowed to see the message sent

Both theKey and theValue can be any Object. There are different way to choose how to create the key and the value. My choise was the following:

The value will be simply the index of the board where the click was performed. This is the critical information to send to the opponent so that the opponent can display the square with the right symbol.

After sending the message to the server , the incremental keyMove variable is updated. And the theViewer.squareClickedIndex variable is set to -1 so that next time (and when it will be again my turn) it will be possible to click again.

Now that the message is sent let’s suppose to move to the opponent client. This client must receive the message and display the opponent’s symbol on the board on the right position (board index).

This is done in the gotStateChanged function where the server sends to the client the serverEntries array containing the moves in terms of ServerEntry elements.

Because we sent only 1 message, only the first element serverEntries[0] will be used.

While the client who sent the message is not doing this simply because we already set this on the clickHandler function. That was a choice. An alternative would have been to set the symbol for the client itself after he received back the gotStateChange event from the server.

In any case the setNextPlayerTurn is called. First thing the currentIndexPlayer is updated with the next player. This is simply done adding 1 and set back to 0 the index in case it’s greater than the allPlayerIds array length.

Then the doAllSetTurn is sent to the server with the id of the new active player. It is also possible to set a maximum number of millisecond for the move (or -1 to ignore this).

This soAllSetTurn function must be called by all the clients to have any effect. And this is the reason why the gotStateChange function this is called from both clients. This is also useful to have both clients updated in terms of current player index.

The last action in the gotStateChange is to check if the game is over. If so the setupWinner function is called.

The main purpose of this function is to call the doAllEndMatch function to inform the server the game is ended. Again, as all the doAll…. functions, this must be called by all the players.

The parameter sent to the server must be an array of type PlayerMatchOver. Each element must contain the id of all players that have finished the game. In our case both players end the game simultaneously.

Therefore there is a loop in the allPlayeIds array to create a variable of type PlayerMatchOver. Again the static method “create” is used with 3 parameters: