Ok, it’s not an april fool… the bulgarian freelancer Krasimir Tsonev really made a Box2D based RPG game called The Big Adventure. 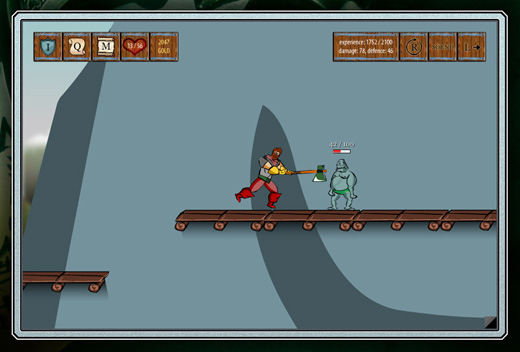 And he also built the official game site with all features it needs to attract players: a community, a forum, a ladder, updated news… really a good job.

Now he wants to share with us his experience:

« Actually I wanted to create a RPG game since a long time ago.

I made a little research about what engine to use and now the game is based on Box2D. Your articles helped me a lot in the beginning. Now the game has more than 1200 registered users.

Here it is a short information about the game:

I spent the last two months working on it: the main idea was to use the Box2D engine to create a jump n’run game. But I also wanted to make an RPG so I decided to create towns between the levels.

So to travel between the towns you have to play the jump n’run game i.e. the Box2D game.

First I created the wrapper of the Box2D engine. You know it’s a little bit complicated to just start with it. Then created some of the major graphics like those of the heroes, some enemies, collisions among them etc.

One of the coolest features of RPG games is the inventory and the ability to wear something. I really love games like Diablo so I was inspired from them. I made possible to wear weapon, helmet, amulet, armour, gloves, belt, shoes and ring.

Invested some time in real time changing of the hero’s graphic. I.e. if you change your weapon the its graphic is also changed. The player also has some characteristics like strength, dexterity, luck, life, damage, defence.

The items that you are wearing give additional points of course. That wasn’t enough for me and I made a quest system. The quests can be taken from the taverns in the towns. You can speak with different people that of course have some problems to solve :)

After solving a quest you can get more gold, a new item or experience points. It was easy to create a shop for buying and selling items also. All the items and characteristics of the hero are auto saved every 7 seconds, which means that you can play again tomorrow and nothing of your progresses will be lost.

When I released the game more ideas just popped up in my mind. For example potions that can transform your hero in a mouse, rabbit or bear. The mouse potion is used to be able to go through really tiny places, the rabbit one to jump over a big hole and the bear potion to double your damage points.

Some of the ideas came from people that are playing the game. When I started the forum on the site some of them just suggested things that they would like. For example the marketplace. It’s a specific place in some of the towns where you can offer items to the other players for a price that you want. Then they can buy your items ;)

– I used flex (AS3) and FlashDevelop to write the code
– Flash for the graphics
– LAMP as a backend solution
– Tons of AS3 libraries that I wrote during the last few years also take a part in the project
– the MochiAds, Kongregate, GamesChart and Facebook apis are also integrated »

I wish Krasimir the best luck with his project and obviously he is invited to update us in a couple of months with some fresh news about the community, the monetization and new projects.