When I design levels for my games, I try to make them funny and challenging.

I always think how much will players enjoy my levels. I guess you do the same.

But I have a question… Do players play all levels? Is it worth the pain of testing and finetuning the n-th level when the average player will never see it?

How many players will see all levels?

I collected some data with the amazing SWFStats API about LineBall‘s first 10 days in the wild.

More than 250,000 players tried to solve the game, so here it is a table with the collected data:

As you can see, only 5,4% of them made it until the last level, look at this picture to see the playing curve: 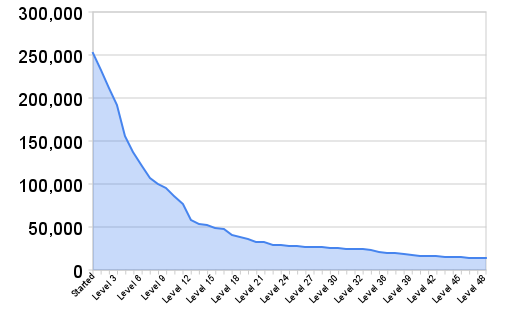 Now it’s time to understand why and when players leave the game.

Every level is started by a certain amount of players. The problem is some of them don’t complete it. This may happen for several reasons… the level could be too hard for some of them (noobs!!), or the game starts to get boring after some levels.

If it’s normal some players quit the game without beating the n-th level, you should worry if a lot of players do it. Probably levels are unbalanced or the game gets boring after a while.

This means if 100 players start a level and less than 85 complete it, there is something wrong in it.

This is the graph of LineBall give up ratio 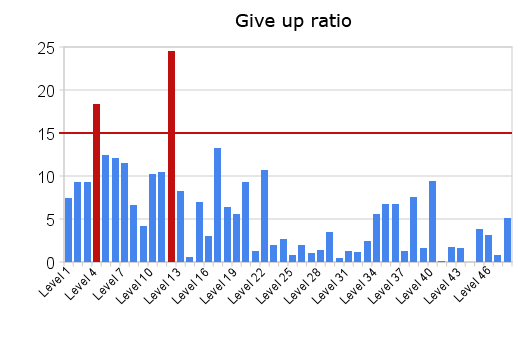 Time to think about what went wrong with these two levels and do a better level design next time.