After reading Do players play all levels of your Flash game? post, Tarwin Stroh-Spijer from TouchMyPixel tells us the experience with his games and an overall about players keeping playing the games.

« Some great stats, thanks. I’ve been looking at this myself for the Scarygirl game, where we had an even sharper drop off. For us I think the reason the drop-off was sharper was the fact that each “level”, the place where people feel they’ve accomplished something, was a lot longer, taking between 10 and 15 minutes on the first go. 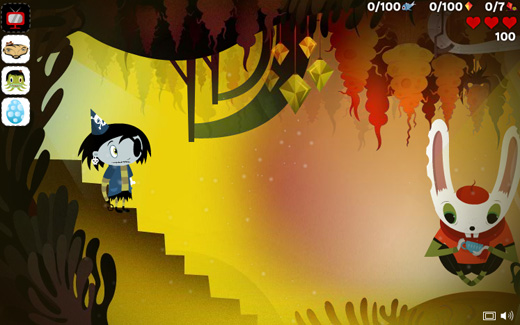 From talking to people who have played the game, especially those who have liked it, I’ve come to the same conclusion as Devon (see the orignal post), it’s all part of the medium. Federico also has a great point. Although Scarygirl does try and bring a developing story out people might not feel they are getting anywhere, at least not anywhere “different enough”.

I’m been wondering recently if the share-ware or time-ware model would actually make people play this game more, rather than less. That is, at some point in the game (before the point at which 90% of people stop playing) give them a screen to tell them they have one level left to play before they pay, and show them all the interesting stuff coming up (most people only played the more traditional platforming sections and never even know there’s a fighting game, a puzzle or a bike riding physics game coming up.

If someone’s already paid for a game, download or not, they’re more likely to keep playing when challenged, or come back to playing once they’ve finished a session. People would rave to me about how much they loved the game but when questioned they’d say they never made it past level 3 or 4. Interesting huh?

Farbs (http://www.farbs.org/) talks about this in a way with his description of his development of Fishie Fishie – he had trouble developing 40 levels that progressed nicely until he decided to do X levels per “theme”. This meant it was easier for him to design the levels, but also easier for the player to get to a point where they feel they’d made an accomplishment, and also know how far it was until the theme, or style of gameplay, would change.

The original Mario did this very well. After a certain number of levels (4 of them – http://ian-albert.com/misc/smb.php) you changed worlds, which game you some sense of achievement. This did fail though in the fact that each world was not that differently themed and really followed the pattern of above ground, underground/water, floating platforms, dungeon/boss, which meant it could get quite boring.

This led to a lot of reviews of subsequent games saying things like “it’s includes the obligatory snow level” – but I think it’s done more good than harm to game design.

I think this is different than farming / building games, and maybe even RPGs, where it can be the feeling of growing yourself or your plot or house that keeps you going. It’s not how the environment changes you (or your style of play) but how you can change your environment.

A big example of course would be The Sims, but there are also simpler ones out there such as Bunni Bunni (http://bunnibunni.com/) which seem to work on the same principals. »