After a couple of days messing around with StencylWorks, I came out with an interesting (I hope) game design concept I am developing in these hours.

Meanwhile, I am adding some features to the demo I showed you last week.

We are going to add:

You’ll love StencylWorks, as you will be able to create your intro scene in three easy steps:

First, create a new blank scene and make it as starting scene (look at the star in the upper left corner)

Then, the new scene will have a Cutscene behavior I called “splash to game”…

… which handles the transition once the player presses UP key.

StencylWorks will handle transitions and do the dirty job for you.

Since we don’t want the new scene to be completely empty, we are adding some text. First, you will create some font specifications, it’s very easy as it reminds the million font family/color/size selectors you are used to deal with for ages.

Once you are done with font creation, let’s see the behavior needed to place them horizontally centered: 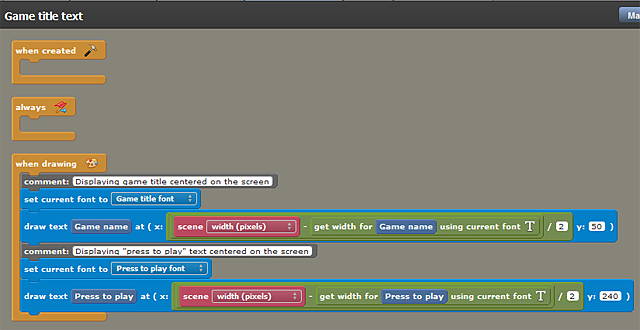 Using the “Game name” and “Press to play” attributes helps us to set texts in a quick and easy way:

And now we also have some content in our intro scene.

To make Kira walk better and jump, this is the behavior I suggest:

And this is the result we’ll get:

Use UP, LEFT and RIGHT arrow keys to play.