Although high budget Flash gaming portals are conquering the big market, there’s still room for niche portals. Some time ago we saw the example of Hooda Math and its route to become a 2,000,000 visitors/month portal.

This is the story of Mark Klocek, who turned a Solitaire site into a 25K visitors/day portal.

I own Solitaire Paradise. 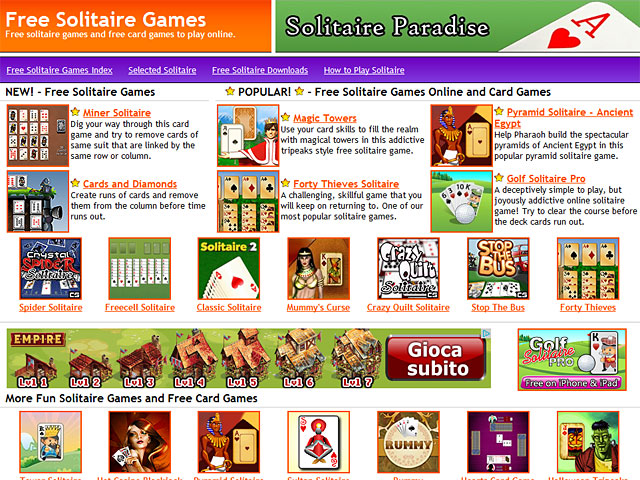 After being recently inspired by the Hooda Math post I decided to share my slightly different take on building up a niche card game portal which now has over 25,000 visitors a day.

I had no programming skill or artistic talent, but after working many years for Glu producing games for phones I knew I could produce and design a game. My first step was to find a coder and artist, which was easily done through rent-a-coder (now known as Vworker).

I created a design document, explaining how the game worked and what kind of art should be in it. Even though this was “just” a solitaire game, the document ended up running to 20 pages. Why on earth did I do this? Well after all my years working I knew that this kind of document made it much easier for contractors to bid on making the game and they knew exactly what I was trying to achieve. Even though you can’t always get everything right in that kind of design, it really means that actually making the game is so much smoother.

The first solitaire game I made using this technique was Magic Towers Solitaire. Broadly it went well but the one thing I messed up was my art direction. I wanted to create something friendly, but because I used poor inspiration images we ended up something that was way too cute. The game played well though, and after asking for a change in style and paying for it, I had my first game. Now I must admit there was another thing that held the game up, erm… it was of course me again! I really had to make sure that the way the cards and the game felt was just right. It’s something I still can’t quite get over, but I do think it’s important. This hold-up meant that the game went back and fourth between me and the coder a bit more than was maybe necessary.

Originally I wanted to get Magic Towers sponsored, but as might be expected with a solitaire game there really wasn’t much interest from most of the larger portals. They don’t really deal with niche card games very often. So having discovered the flaw in my original plan I was in my mind left with only one choice and that was to build my own arcade portal, specialising in online solitaire games and card games.

I then spent days created a very long distribution list of people to email and places to upload the game so it got noticed. These days it is possible to hire people to distribute your games far and wide, but a few years ago this wasn’t the case. The game got played and people seemed to like it! It even managed to get on a few bigger portals at the time, including MindJolt which was massive boost to the game. Still once you can make a living the best bit about making a game that people like is seeing those happy reviews!

I quickly added as many of the more decent and popular solitaire games made by other developers to what would become my flash portal, including classics like Spider Solitaire and Freecell. I noticed that people came back to play all these games and within a few months the portal started getting over 3,000 visitors a day which at the time I thought was fantastic. Even with this amount of visitors it felt to me that there was an audience for what I was trying to accomplish.

The Next Game and Growing

I created a few puzzle games for another small portal site I created called Match3.com. Of course I thought it would be easy to repeat the same kind of success, this time it seems I got it wrong. That was unfortunate but then I went I back to thinking of the next card game I could develop. I spent ages playing through lots of different solitaire games and card games, but I didn’t really think I could add anything to them until I played Pyramid Solitaire.

With an enthusiasm I again went through the process of creating a design document which resulted in Pyramid Solitaire – Ancient Egypt. This is probably my most successful game to date. I took the classic pyramid solitaire game and spent a few days trying to work out if I could tweak the rules to make the game more fun. I must have succeeded as since then most other pyramid solitaire games use that same rule tweak of adding a temporary space to place a single card. Of course I made sure the game had a beautiful theme. I think with this one, the real secret was that I took a game that basically relied on luck and changed it enough that skillful players could progress much further.

Pyramid Solitaire also ended up getting lots of links from around the web. Eventually this meant that the game was getting the most plays from Google visitors. I’d never really thought about search engine optimisation because for me being involved in making the games is half the fun. Then it dawned on me, I had a really good collection but apart from Pyramid Solitaire nobody would be able to find the website. So I started thinking about how to get my website noticed. I started reading books on Search Engine Optimisation and I followed what they said while trying to keep my site friendly to the players. This post is not the place to explain SEO and website usability, however in a nutshell it can be summed up as having good, well written text (that mentions popular keywords), a variety of links to the site and a reason for people to keep coming back. It’s much harder than it sounds and it is really time consuming.

Between my SEO efforts, continuing to update the website, making my own new games and distributing them and finding more fun solitaire games from other developers, the site has now reached a healthy 25,000 visitors a day. This process took years to take hold though but I think with enough effort it can still be done today.

I am still making fun solitaire games like Golf Solitaire Pro and I’m now trying to replace weaker versions of popular solitaire variants with improved versions like Klondike Solitaire and Forty Thieves. The formula, if there is one, still remains the same. Spend lots of time working out how to offer interesting rule variations for the players and build an enticing theme that captivates their imagination. Solitaire games have a reputation for maybe being a bit dull, something to play when you’re really bored, but I’ve always thought that they don’t have to be like that.

I’ve also started arranging conversions of our games to iPhone and iPad. We’ve been really lucky with Magic Towers Solitaire and Pyramid Solitaire so far and we’ve just released Golf Solitaire Pro too.

Now here is one little trick. Sometimes I re-theme our more popular games for different seasons, Halloween is a good one. It’s a great way for people to get more enjoyment out of the games and to allow us to try to find new players who might enjoy the game, but maybe they’ve been put off in the past by the cuter graphics we like to use.

Unlike some other portals we choose to keep the MochiAds in the games and ignore getting site locked versions of the games, especially as so many of the popular games on the site are the ones we made. It seems that the players don’t mind the advert at the start and they keep coming back.

After all the years working on these games and the website I feel especially proud as our third most popular search term is the name of the site – Solitaire Paradise. Undoubtedly this means people like the web site and the games we host there!