Flash developers all around the world, mark this date: March 31, 2014 as one of the worst dates ever in the story of indie game development as by the end of this month, according to the official post, MochiMedia will shut down its services.

At the time of writing, my first Flash game, Circle Chain, is serving MochiMedia ads for 2,332 days!!

I am feeling sad, just like when an old friend passes by, because I owe a lot to Mochi guys. Thanks to MochiMedia I was able to develop, publish and monetize Flash games on my own, and I am still receiving passive income from games published more than 6 years ago. They gave me all the tools to add leaderboards, awards, track players and links, allowing me to focus only on the bare game development.

MochiMedia API is the most complete gaming API ever made.

So the first thing I have to say is: THANK YOU. I want to remember you with this image: 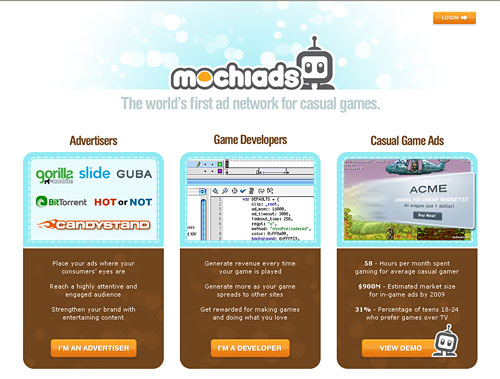 But, as the show must go on, now we have to face the after-Mochi era, and we have to be prepared to what is going to happen. So here is a list of things you can do or even consider:

1) MochiMedia closes = MochiBot closes: you will lose all your statistics. Before the shut down, you should check which sites gave you the highest amount of impressions (but you already know who they are, because you check your stats weekly, don’t you?). These are the sites you will want to continue to serve your ads.

2) No version control = your game 1.0: if I have a clear idea of version control, it works this way: today you upload your game to a portal, and tomorrow you change something in the game, which is pushed from Mochi servers to the portal each time your game is loaded. Once version control is shut down, only the game which you physically uploaded to the server will be played. Using the list obtained at step 1, update your game manually where needed.

3) No leaderboards: this may not seem an issue, until your game will display the game over screen waiting for a callback from leaderboards. If you relied on some event generated from the leaderboard to let players continue with your game, follow steps 1-2 to fix this.

4) Are you a Mochi publisher? If you run an arcade site and host your games on your own server or somewhere on the cloud with your own account, you’re safe. If you used to call SWFs files directly from Mochi servers, your games won’t load. Chech your portal scripts or your arcade WordPress themes to know how do you manage games. From now on, you will have to host your own games, or at least you don’t have to rely on Mochi servers anymore.

5) Are you an AS3 fanboy? Me too, but if you want to make a living or some earnings from indie game development, remember you also are a businessman. You should also start learning HTML5 and mobile development. I am not saying Flash gaming is dead. I will continue making Flash games. But I am stopping making only Flash games.

6) Find another Flash game ads network. You don’t want to lose the opportunity to earn passive income, so you will need some other game ad network. I would suggest FGL Ads, I also published a tutorial in the post a new way to make money with your Flash games: FGL Ads, Epic Game Ads or CPMStar.

7) Deal with Big portals which run theyr own ad network: sites like Kongregate, NewGrounds, Spil Games and MindJolt can make you earn a lot if you have games that match their target. I personally got good earnings with MindJolt and Spil.

8) Find a new analytics API: I did not test any of these services, but I know they can fit to your needs: self hosted Piwik, self hosted Playtomic, GameAnalytics and Flox are worth a try.

10) Accept the new challenge: this is the most important step, more important than any link you will find in this post. It would be easy to cry and complain about the good old times, the passive income and so on. But you have to move on, and I know you can do even better than the good old times. You are a game programmer. You solve bugs, deal with problems, turn flat lines of code into magic, entertain millions of people around the world. There’s nothing impossible. I am waiting for your next game, on one platform or another.

Last but not least, I would like to bow to three people which in my opinion represented the true spirit of MochiMedia: Colin Cupp, Bob Ippolito and Ada Chen, in no particular order.