The new release of Stencyl adds a lot of awesome features you can see in the official Stencyl 3.1 release page, and above all an interesting image API which will allow us to explore new options of gameplay.

First, let’s see what we are going to do:

The green actor is moving around the stage, and you can dig holes in the terrain with a mouse click. For the sake of semplicity, holes have a square shape, but they can be any shape you want, since both terrain and holes are images.

Now let’s see how easy is the creation of this prototype thanks to Stencyl’s image API. If you are new to Stencyl, you can start with some of these tutorials.

First, you need to know the path Stencyl uses to save the games. You can find it in File -> Preferences -> Workspace. 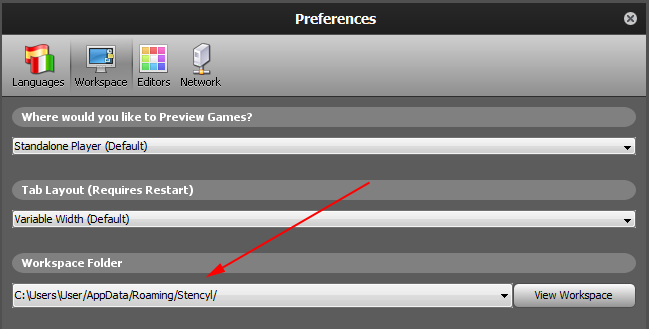 For the sake of semplicity, I placed all the actions and events in a single scene behavior, which has three events:

Created: executed only once, as soon as the scene is created.

Drawing: each time the scene is refreshed

Let’s start with the event called when the scene is created:

Direction just specifies the direction, in pixels, the “player” will’ move at each frame. Setting it at 1 will cause the player to move to the right. Terrain and Hole will store respectively the images of the terrain and the hole I uploaded in extras folder.

With image from file block you just have to specify the relative path (without quotes) and your variables will contain the image itself.

But the only bare image is not enough to have it ready to be used in our games, we’ll need instance of to make it accessible to game events.

Also notice the player actor is also created in this block.

Now let’s see what happens when the player clicks on the stage:

Finally, the event to handle player movement is not that interesting for the scope of this tutorial, since it just defines some hot spots in the actor to check for collisions again terrain image with get pixel at block.

It basically shares the same concept with my pure JavaScript platform game engine.

I have a couple of ideas about a game to create with this API, and I can’t recommend enough Stencyl for its ease of use. Download the entire project.