One of the few drawbacks I found on the awesome Construct 3 was it wasn’t possible to run it on some browsers such as Microsoft Edge and above all it did not run on any browser on iOS devices, because even google Chrome for iOS is only the Safari engine with a new skin.

With an iPad PRO 12.9 and a daughter willing to learn to make games, this was quite an issue.

With Windows 10 Fall Creators Update, Edge has been powered with a lot of new features wihch allow Construct to run on Edge 16+, and above all with iOS 11 update, Construct can now run on iOS devices too! So you can work on your PC, Mac, Chromebook, Linux machine, Android phone, iPad, and so on.

This is probably the best chance we have to create a game just using a mobile device, and although it’s obviously better to make it run on a laptop, it looks very nice on the iPad PRO 12.9, have a look at the event sheet displayed on the iPad: 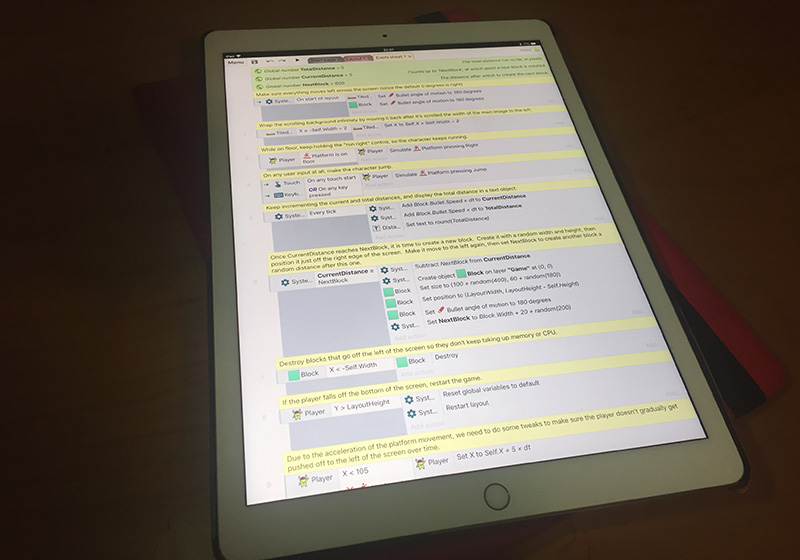 Ok, I am lucky I do not have to make a living as a photographer because this photo looks really bad, but it’s an actual photo and not a Photoshop template with a smart object, so at least you should be able to see how Construct runs on an iPad.

Now I only have to teach a 9 years old girl how to make games and to explain her it won’t look better than Super Mario Run, but it will be interesting to see how to teach programming to a 9 years old geek, maybe I will publish some tutorials for kids.

Now, go and play with Construct 3, no excuses, it works on every device.